Havana, Cuba: This place is a mecca for vintage car lovers.

It’s a rolling museum featuring what many believe is the golden age of the automobile. The brightly painted tapestry of mainly 1950s’ nameplates such as Chevy, Buick, Oldsmobile, Pontiac, Dodge and Ford make the streets of Cuba appear frozen in time.

For most of the last fifty plus years, Cubans have only had access to cars purchased before the country’s 1959 revolution. Newer Russian Ladas, Czech-made Skodas and the odd newer European nameplate are seen but most of the autos in Cuba are mid-fifties beauties. Parts stopped with the embargo as well, and thus drivers became creative, trading and repurposing vintage car parts to make existing vehicles last for some 50 years despite burning sunny skies and salty ocean air. The ingenuity demonstrated in keeping these old rides going was astounding.

One sunny October day in old Havana we stumbled upon a car park teeming with colourful vintage vehicles. All were painted with pride in backyards with paintbrushes and paint smuggled in from the United States. Many have been converted from coupe to convertible with a welding torch, it was, to say the least, awe-inspiring.

The drivers are as fascinating as their cars; largely self-taught mechanics.

Alain Galvez and his family friend Juan Carlos Rodriguez, took us on a spectacular site-seeing trip of the Havana, one you won’t find in the guidebooks. Alain’s family is the proud owner of a red and white 1957 Buick Century Riviera. By Canadian standards it’s a 6 out of 10, but in Cuba it’s easy to overlook missing door jams and rubbers.

Alain is a member of the A Lo Cubano Classic Car Club, the vintage auto enthusiasts made famous around the world thanks to the Discovery Channel. The show chronicles the members of the club and their struggles maintaining their cars despite the embargoes that make obtaining factory parts impossible. Very nice ice blue 1958 Cadillac that was once a four door hardtop that’s been converted to a convertible to appeal to the Cuban tourist market. One of the hundreds of convertibles for hire cruising the famous Malecon in Havana. 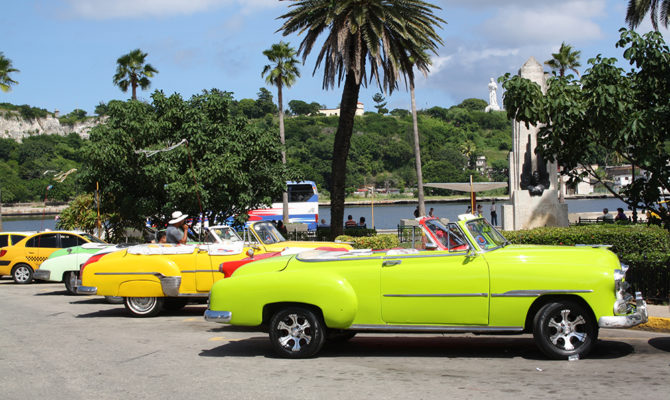 A prime example of the Cuban Frankenstein car in Havana, 1952 Chevy Belair two-door hardtop converted to a convertible. 1950’s cars make up the majority of vehicles on the road today in Havana. Rolling through the streets of Havana with Alain Galvez in his 1957 Buick Century Riviera. Interior of one of the nicest cars cruising the Havana streets, a 1956 Ford Fairlane convertible. President of 360 Fabrication Rick Francoeur meets with Alberto Gutierez, President of the A Lo Cubano Car Club, the club made famous in the Discover Channel show “Cuban Chrome” outside the world famous Tropicana Club in Havana. The iconic ’59 Cadillac fin, the signature element of the what may be the ultimate 50’s car. 1959 Cadillac picking up tourists in Varadero For Cuban families, owning a classic can bring in much-needed income when used as a private taxi. The average salary for a state job in Cuba is around $30 per month, while a taxi driver in high tourist season can expect to earn $30 a day. For the owner of a classic car, $30 to $50 an hour is common for a ride through the historic areas of Havana.

As guests of A Lo Cubano, we were invited to a private show in the parking lot of Havana’s legendary Tropicana Club where A Lo Cubano members brought their cars for me to see, review and discuss. It was an honour to be a part of such a special event, and to review the cars and give tips to the owners.

The level of pride the club owners had for these mobile museums was fantastic. Let’s face it, five plus decades is a long time to keep any old car running. I saw resourceful Cubans utilizing parts from Russian-made Ladas, an engine from a Peugeot, a suspension from a tractor. Those put-together vehicles are commonly called Cuba’s Frankenstein cars, but it’s important to note that we also saw some spectacular 1955 Chevys, a gorgeous 1957 Rocket 88, and a ’59 pink Cadillac that would stop traffic on the streets of Vancouver.

Rick Francoeur is the owner of the custom car shop 360 Fabrication, in Abbotsford, British Columbia. For more information visit: www.360Fabrication.com