The Corvette won the North American Car of the Year award, exactly a year after it debuted… The motor city was abuzz at this year’s Detroit Auto Show. The car industry is roaring back in the US and we have record sales in Canada, so there are many new products for all segments of the market.

The performance Corvette Z06 got its name back in the 1960s when customers could order a high performance “Z06” package that delivered a track-ready Corvette.

Today, Chevrolet is still delivering track-ready Corvettes, now they come with the Z06 name. The all-new 7th generation Corvette Stingray was unveiled last year in Detroit and it won the North American Car of the Year award, exactly a year after it debuted. This year it was all about Z06, featuring a 625hp all-new supercharged engine with an all-new eight speed automatic transmission and for the first time the roof panel is removable for open air driving. Using the same all-aluminum platform as the regular Stingray, this new car is lower, with bigger tires and brakes, more cooling inlets and in initial testing, is the fastest Corvette Chevrolet ever made. 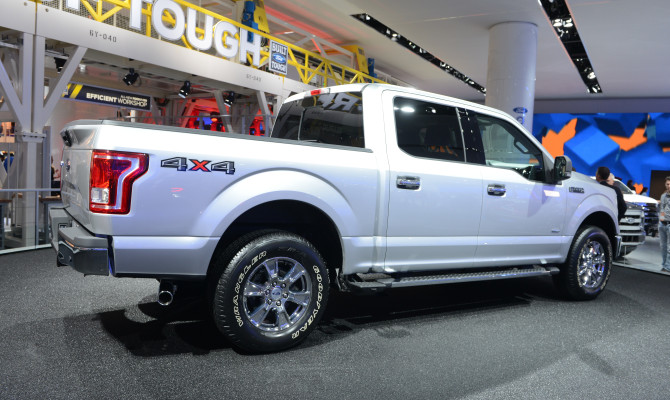 Any new F-150 is a huge deal for Ford, as it is the number one selling truck in Canada for the past 48 years and the best selling vehicle overall.

The big news is that the all-new F-150 is now constructed using lighter high-tensile steel in the chassis, and high strength aluminum alloys in the body, mostly the trucks box. This combination contributes to a 318-kilogram reduction in weight, helping to make the truck stronger and much more fuel-efficient. There will be four engines available from a base 3.5L V6 to a 5.0L V8 and two Ecoboost engines, a 2.7L and 3.5L V6. Ford did not have specific fuel economy numbers but there will be a significant improvement over the existing truck. Other improvements include an improved tailgate stepladder that folds away easier and power locking and folding tailgate. This all-new Chrysler 200 is light years away from that old platform. In fact, it uses the same Alfa Romeo platform found under the Dodge Dart and impressive Jeep Cherokee. The strong points of this platform are excellent on-road manners with a quiet interior and superb handling. There will be a 2.4L 4-cylinder engine with 184hp or the optional 290hp 3.6L engine found in many other Chrysler products. The Chrysler 200 will have front wheel drive or optional all wheel drive, derived from the same system used in the Jeep Cherokee. This will provide Chrysler with a unique offering as most other manufacturers stick with two-wheel drive. The interior features the Uconnect computer interface system and is covered in soft-touch materials and supportive seats. One car that pulled big crowds was the new Porsche 911 Targa. We all know what a Porsche 911 looks like; they have been modifying the same basic shape for over 50 years.

What this new Targa has is a retractable roof system that will stop traffic. At the push of a button the whole rear of the car releases and the centre convertible roof is stored underneath, then the rear section is again attached. The back panel incorporates a wrap around rear window, making a distinctive statement while keeping the overall design of the car intact. Previous Targa models had either a removable centre panel of a glorified, oversized sunroof, this new model is the best of both.

Starting at $115,900, all Targa models will come with AWD and will arrive this spring. The C-Class is so important to Mercedes brand in North America that they held the world debut of the C-Class here, plus it is their number one selling car. Arriving later this spring and summer, this new compact sedan is a longer and wider and uses a combination of high-tensile steel and aluminum components to shed 100kg for a 20 percent reduction in fuel economy. An all-new turbocharged 2.0L 4-cylinder is the base engine with 235hp. The optional 328hp 3.0L V6 is the other power plant initially. The highlight is the more dynamic looking exterior and superb interior. The dash is stunning, featuring a touch screen iPod type screen mounted on the back.