Car Review: Mercedes’ GLC is at Home on Any Terrain

“Most of those purchased will become city dwellers, destined to hunt in shopping malls, but the drive proved the GLC is more than capable in the wild…” 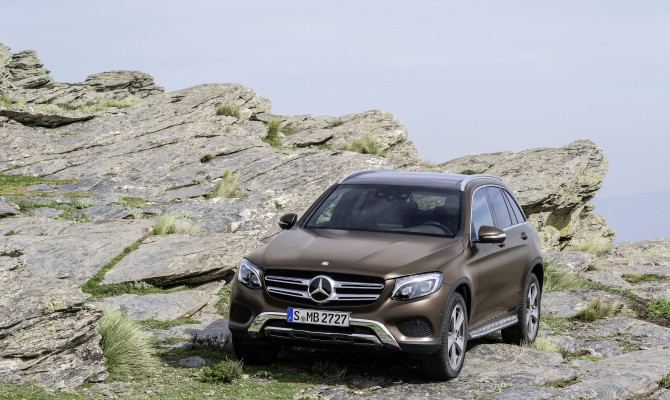 The route taken for the launch of the 2016 Mercedes-Benz GLC SUV was cruel and unusual punishment for some of us.

The navigation system guided us through a spectacular drive of more than 500 kilometres, which started and concluded in Basel, the Swiss city straddling the Swiss, French and German borders. First, we motored to Strasbourg, the capital of Alsace, and then returned the next day via the Vosges Mountains and the Munster Valley.

Cruel? – Well, for the oenophiles among the participating media group having to pass without tasting at the many historic Alsace vineyards along the way made one weep. It was just as bad for the beer-swillers who whiffed the smell of hops as they dreamed about sinking a chilled Kronenbourg.

Those, for whom food excites, had their taste buds tickled. They wolfed down amazing soft cheeses and cold cuts at the roadside. A curious donkey and a family of storks observed our feeding frenzy from a nest on high.

The mental torture was eased by an extremely pleasurable drive in this premium mid-range, second generation SUV from Mercedes-Benz, which replaces the GLK moniker with GLC reflecting its mechanical similarities to the C-Class sedan.

I won’t wax lyrical about the shape and looks, the pictures here tell that story. It’s a little longer and wider, meaning those aboard get more space in which to lounge and enjoy the luxury this top German brand typically offers. And, of course, more space for groceries and golf clubs.

A tablet-like 7-inch screen sits above three large air vents, mounted at the top of the centre stack, which features a well-placed controls touch pad in the lower console.

Back to the drive. Firstly, the test cars were pre-production Euro-spec 250s but we did get to take to the winding, often mountainous roads in a version that will more closely resemble the Canadian 300 4Matic. The same 2.0 turbo-four gas engine we get, though light of around 33 horses, powered it. The GLK-spec 3.5-litre V6 is gone but worry not, if I might be crude, the four banger, coupled with the new 9G-tronic transmission, is more than adequate on the freeway – zero to 100 km/h in 7.3 seconds – and up those hills. And it was quiet in that cabin.

Incidentally, the GLC will use four-cylinder power in all versions – gas, diesel and plug-in gas/electric hybrid. Economy ratings are expected to be in the low 8s L/100kms in the city, low 6s on the highway.

Dynamic Select is standard fare, allowing the driver to switch between Eco, Comfort, Sport and Sport+ modes. The tester was also equipped with the optional Air Body Control, which improves on its predecessor’s Airmatic system ability to smooth out the ride.

Mercedes boasts that the GLC is at home on any terrain. Most of those purchased will become city dwellers, destined to hunt in shopping malls, but the drive proved the GLC is more than capable in the wild.

Sadly, the Off-Road Engineering package will not be offered in Canada. An off-road course included a 38-degree incline, which my drive partner Regina Chan expertly scaled, tilted about 25 degrees at one point!

The standard safety package is extensive and notably includes Collision Prevention Assist, which warns of an imminent crash and helps to apply the brakes, and the self-explanatory Passive Blind Spot Assist.

I’m a sucker for M-B’s Intelligent Drive concept. The various systems take data from the various sensors to boost comfort and safety. Systems that think and act somewhat quicker than your average driver!

The first Canadian models will be gas-powered, a turbo-diesel comes in the 2017 model year and a plug-in hybrid is scheduled for 2018. A Coupe version is on the way but no date yet.

The base sticker price is $44,950 but take it up to the premium package, with COMAND navigation and a superb panoramic roof, and you are nudging 50 grand. Load in those extra tricky active safety technologies and you soon hit the mid-50s.

The SQ5 is the top of the line Q5; it comes with just a few options and makes an already excellent product oh so much fun… Audi is the fastest growing luxury brand in Canada likely due to excellent styling, impressive interior design and advanced engineering.

Audi seems to be hitting the sweet spot in terms of appeal and design that is the envy of many other luxury brands. The Q5 has been a cornerstone of the Audi brand helping couples and families get into an Audi product but retain the functionality that is needed to move people and cargo around in style.

Compact SUVs are growing so quickly in popularity that they might overtake compact cars in sales. The Q5 is sold with a turbocharged 4-cylinder, a turbocharged V6 diesel or two supercharged V6 gasoline models that will rip the tarmac off the road. The SQ5 is the top of the line Q5; it comes with just a few options and makes an already excellent product oh so much fun.

When I picked up my test SQ5, something looked different. I quickly realized that the 20-inch wheels had been replaced by 19-inch wheels, fitted with winter tires. The stance of the SQ5 looks so much better with 20-inch wheels or the optional 21-inch wheels for just $1,000 more. The SQ5 has a slightly lower ride than the other Q5 models and comes with splash of grey trim inside the front air intakes, side mirrors, rear air diffuser, plus subtle badging. It could be argued that the SQ5 is a little too subtle for the $57,000 starting price.

Audi has been referenced as the high point in interior design. I would agree that the latest products have some wonderful materials and design but this SQ5 is starting to show its age a bit. The screen in the dash is on the small side compared to huge screens from BMWs X3 and domestic brands like the Jeep Grand Cherokee. The lower parts of the dash and doors still have hard plastic bits, where BMW does a better job of covering theirs in soft-touch materials. Even on this top model, Audi still charges a whopping $3,200 for navigation and $1,000 for the Bang & Olufson sound system. In this day of navigation-equipped smartphones, the obscene amounts car companies charge for navi-equipped cars will soon end.

On the positive side, the SQ5 is fitted with superb seats that are bolstered perfectly and covered in ultra-soft leather. The seating position is first rate as is outward visibility, cargo space and rear seat room.

The base Q5 is fitted with a turbocharged 2.0L 4-cylinder with 220hp. This model is a nice balance of fuel economy and driving pleasure. The SQ5 comes with a supercharged 3.0L V6 with a heart stopping 347hp. The base car will take a run to 100km/h in 7.1 seconds, the SQ5 in just 5.3 seconds, almost a full 2 seconds quicker. What is the most impressive part of the SQ5 is just how good it is to drive in any situation, thanks to the standard Audi Drive Select system. Being able to change the sensitivity of the steering, throttle response, transmission changes and even the sound of the engine, makes this SQ5 a pleasure in stop and go driving or full throttle passing on the highway. I found the comfort setting to be best in the city and the dynamic setting for open road cruising. The ride is firm and very responsive without being too choppy and combined with the potent engine can be placed into corners and is sucked to the pavement thanks to a sophisticated Quattro AWD system.

The Q5 is a solid choice for anyone looking for a premium compact SUV. The base 4-cylinder model starts at $40,900 and is the best seller. This SQ5 is the powerhouse version and does everything so well, point it where you want to go and it will get the driver there with a smile on their face. What might be the best of both worlds in the 3.0L turbocharged diesel Q5 with 428 lb.-ft. of thunderous torque that makes it very quick, but also more fuel-efficient, or the detuned 3.0L supercharged V6 with 272hp.