San Diego, Ca. – Mazda’s new MX-5 RF is the perfect convertible for British Columbia.
In the summer, you can retract the hard top to expose those hair follicles to the sun (once you have slapped on factor 60 sunscreen). Then at the first sign of rain you simply raise the roof at the flick of a switch and in 13 seconds you are under cover. 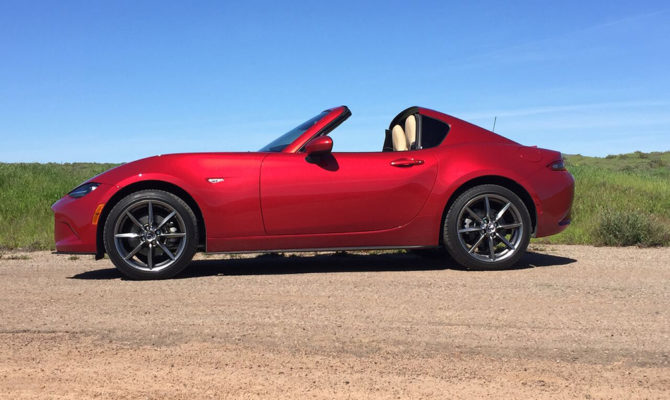 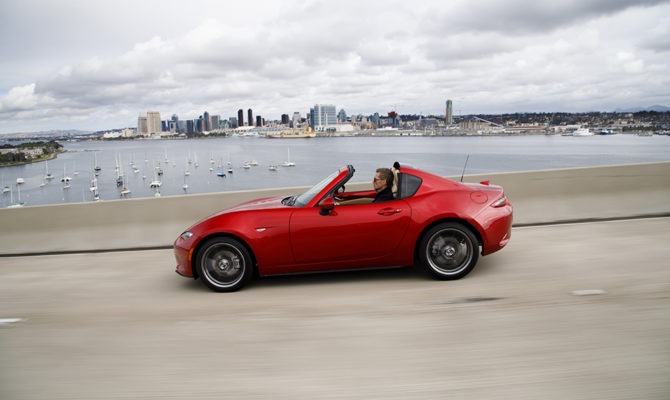 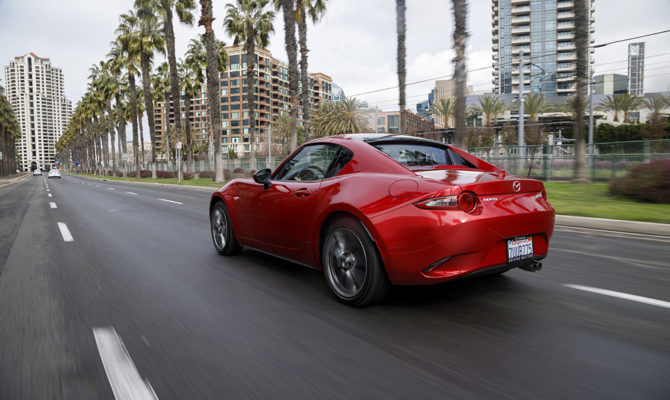 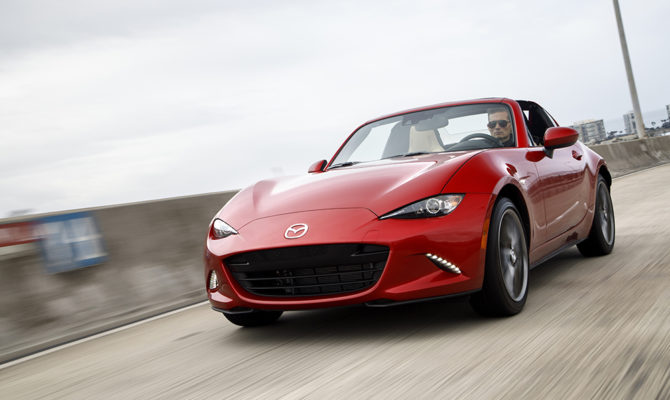 RF stands for ‘retractable fastback’: it is really a coupe in appearance, not a conventional convertible. In the brief seconds it takes the roof to retract electronically, the flying buttresses (to use an architectural term) lift and return to their position, once the roof and rear window have slid backwards and dropped flush into a self-contained storage space. Very neat.
It has an advantage over other retractable hard tops in that it does not ‘hide’ the top in precious trunk space. Now that doesn’t mean it has a cavernous trunk space but it is certainly adequate for a few days away for a couple.
Interestingly, Mazda figures owners will drop the roof for only 20 percent of the time they are at the wheel. Fits the BC driver profile! – Of course, the BC-based fans of the MX-5 (still lovingly referred to as the Miata south of the border) will not migrate to this new option en masse. There are still many hardy souls in Lotus Land that drop the top at first opportunity. They wear woolly hats and a fleece, gripping the steering wheel with blue tinged hands.
The last generation MX-5 had a retractable hard top version and in many areas, it out-sold the soft top version. I must say while I liked the idea of a winterized convertible its design lines never quite worked for me when the hard top was in place. Not that would deter me from purchase because I think MX-5 ownership is more about the open-top driving experience than looks.
At the launch of the RF in British Columbia South, that being California with unseasonal rain, there were whispers about a regular hard top being added to the lineup. I suspect they will see how the ‘open coupe’ performs in sales before committing to a newer version of the old hard top.
When the top is up the road noise is not surprisingly reduced significantly. I hesitate to say it is a quiet as a regular coupe but it’s as near as makes no difference to somebody looking for a fun summer car that will function perfectly well in the November rain.
The RF drives like its soft top sibling. Fact is, it is identical in terms of its power plant, cabin layout and trunk size. It’s a bit heavier but the engineers have adjusted the suspension and engine to ensure a similar road performance.
No, the 2.0-litre, four banger, under the hood will not enable the car to compete off the line with upmarket models from other manufacturers but nobody who buys this car is looking for Porsche-like performance. It is a nice, classy looking little car and in its position as the top selling roadster in the world, with more than one million sold, it clearly doesn’t have to prove itself to anybody. Plump for the six-speed manual if you fancy a sport experience but opt for the six-speed auto if the city is where you do most of your driving.
The regular MX-5 lineup features three trim levels, starting at $31,000 base sticker price, but the open coupe is designated as a $2,000 option on the two top trims. That puts its base price at
$38,800, plus the usual freight and taxes. The tester was loaded with features taking it to the princely sum of $42,200.
If that price tag doesn’t raise your eyebrows then take one for a spin at the first sign of sun . . . and showers.
keith [dot] morgan [at] drivewaybc [dot] ca