San Diego, Ca. – There is much to shout about the latest version of the very popular Mazda CX-5, mainly about how quiet it is!

The crossover vehicle was a fine family vehicle in the last model year but there’s no doubt cabin noise did mean intimate conversations whispered upfront were not possible when the kids were in the roomy back seats. Cured. Improved seals all round and better glass boasted The Man from Mazda. 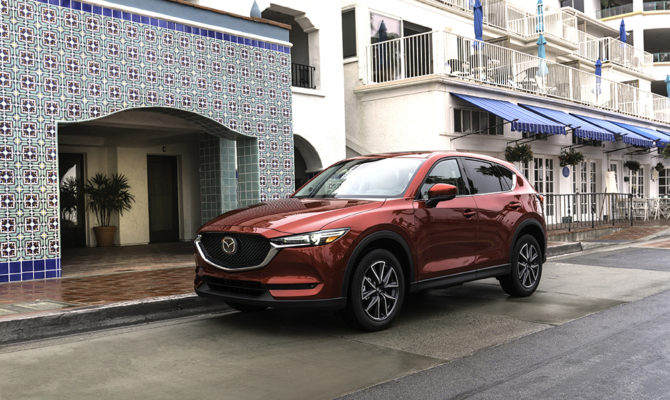 Brave words as we were about to take the 2017 version along those horrible US interstate highways that jar the car every time you bump across the end of each slab of concrete. The annoying rhythmic shake is still there but that’s not Mazda’s fault and at least the bump is muffled.

Of course, the tighter fit and glazing job aren’t the only things responsible for sound dampening and improved ride. It doesn’t hurt that the chassis is 15 per cent stiffer and the engineers paid considerable attention to improving and reconfiguring the suspension. The all-wheel drive version also gets the much-vaunted G-Vectoring Control. Without going into technical detail, it essentially smooths out the ride and reduces the amount of times occupants sub-consciously shift their seating position to compensate for cornering. It’s an irritation probably few people notice but you will now!

But let’s get back to some basic background intel on this mid-size family wagon. It was introduced five years to considerable acclaim. In fact, it has become the marque’s best seller leapfrogging the fine little Mazda3 and accounting for 25 per cent of company sales.

Not good enough. The perfectionists at Mazda figured they could tweak it and make it that much better. In the quest for near perfection they carried out 698 tweaks to produce the second generation CX-5 but thank goodness, the presenters at the launch here in California didn’t list every improvement.

They were right to make a lot of noise about the reduced noise factor and better handling because, honestly, most folks aren’t going to notice most of the other changes. What they do collectively is work to improve an already excellent package.

Its shape and size is virtually unchanged and its pleasing looks have not been changed dramatically. A side-by-side comparison shows LED headlights and tail lamps are now standard fare and the grille has a slightly different look.

Inside, the seven-inch touch screen is much improved with greater resolution and is now placed higher up the centre of the dash than in the previous edition. There are also some subtle changes in the cabin such as the stick being moved forward putting it within easier reach of the one’s hand. Similarly, the door handle is farther back in a more accessible location. The rear seats recline and the back doors open slightly wider.

Here’s a fascinating fact trail: The steering wheel is centered and the gas pedal and dead pedals are placed at shoulder width. The seats were designed using NASA data to provide an ideal body position! As long as you don’t expect to take off like one of their rockets you will be happy with the comfort afforded.

Which brings me to what’s under the hood. The power plant is a trusty 2.5-litre engine, supported by a six-speed auto transmission: sufficient power at 187 hp, to enable to do the job with the whole dang family aboard. There is a 2.0-litre 150 hp engine in the base model, matched to a six-speed manual transmission but I would pass on that. A 2.2-litre diesel is promised soon and that should be interesting, from a fuel economy perspective alone.

There are three trims, the FWD GX being the base model selling for $24,900. Mazda expects most Canadian buyers to take the better equipped GS edition at $29,100. A GT edition with the Technology package tops out at $36,300.

Competition is savage in this market segment but Mazda feels it has done enough to challenge the competitors in the shape of the Honda CR-V, Toyota RAV4, Ford Escape and the Nissan Rogue. Agreed.