It’s hard to beat the original pony car when it comes to topless driving.

You can still buy a Ford Mustang convertible for under $30,000 but if you want to add on all the bells and whistles you can double that sticker price.

It’s the first time yours truly has been able to take the new model for a lengthy spin since it went through its 50th anniversary redesign in 2014. Take a look at the pictures that accompany this review: my words couldn’t do its looks justice.

And Ford has brought this version to the world, making it available in some European and Asian markets for the first time. In 50-plus years of continuous production more than nine million have been sold. The word iconic is over used today but this car lives up to that label, hence the demand for its appearance in movies, television, music and video games. It is the world’s most ‘liked’ vehicle on Facebook. 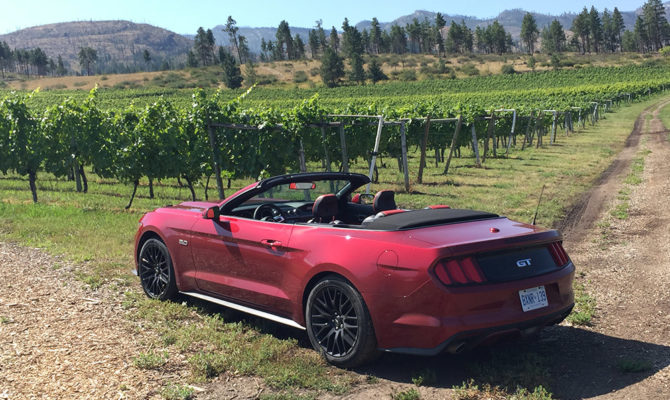 The current model is the first to offer four-, six- and eight-cylinder engines that each produce at least 300 horsepower. There’s a 300-horsepower 3.7-litre V6, a more powerful 435-horsepower 5.0-litre V8, and an all-new 310-horsepower 2.3-litre EcoBoost engine.

The test car was a Mustang GT complete with a whopping 5.0-litre V8, with a start up rumble that drew the ire of my neighbours at my home in Kelowna. (If they thought that was loud, wait until I show up with the 350 GT Shelby version, tee hee).

I opened up the GT uphill on the Coquihalla Highway and it just soared effortlessly to the summit. On the flat I played around with the six-speed manual transmission. It’s noticeably smoother in shifts than the previous model.

Fast cornering produced minimal lurch and handling on the twisties was pretty impressive for a big car. You can tap the toggle console switches to adjust steering effort, engine response, and the transmission and electronic stability control settings.

Fuel economic it is not and my highway shenanigans certainly didn’t reach help the machine mimic the boasted 18.8/11.3 L/100 km for the manually tranny equipped GT.

It may be sacrilegious but I’m not looking for race-like performance in a convertible. I’m looking for pure fun and sun on my face. I could mention the rush of air through my hair if only I had hair.

It’s a roomier ride for four adults than before and if the golf course is the intended destination then there’s ample room in the trunk for your winning clubs and your partner’s.

As you might have gathered from the pictures, I’m more drawn to loading up with wine from vineyards such as St Hubertus in Kelowna!

I should say that we of broad beam may not find the Mustang as comfortable as we might wish on a multi-hour journey. It likely won’t bother most people if they are not so dimensionally challenged. A lot of noise under that hood

When the neighbour lady but a finger to her lips and mouthed the word shush the other Sunday, I realized the growl of the 2017 Ford Mustang GT350 Shelby Edition had caused a rude awakening in the sleepy gated community.

Not much I could do about it as this beast is just loud when its 5.2-litre V8 roars into life. Of course, devilishly, I had toggled the switch that opens up those pipes and raises the decibels dramatically!

It was a whole lot of fun blasting around the Okanagan valley for a week but I’m not sure I would want to shell out $74,000 plus for the Shelby, with its racing blue stripes and $10 grand tech package!