Lincoln Gets Top MKX for Power, Comfort and Safety

“Like most vehicles in this class, numerous helpful driver safety aids are available for the MKX and include adaptive cruise control, lane-keeping system, blind spot information system and cross-traffic alert.” The Lincoln brand has been on a sales revival roll of late, especially since we discovered that movie star Matthew McConaughey is, and long before anyone paid him to drive them, captivated by Lincoln vehicles.

Well, he’s got another one to drool over now, the all-new Lincoln MKX.

The midsize premium utility segment, where the new Lincoln MKX will circulate, represents a whopping 25 per cent of all luxury market sales in Canada. That’s a far bigger (percentage-wise) chunk of the premium auto pie than this segment draws in the US. Additionally, the MKX is made in Canada and rides on a new CD4 platform that it shares with the Ford Edge.

The second generation (first generation debuted as a 2007 model) redesign, however, moves this MKX even further away from its Ford family ties. The new body is lower and wider with curvaceous sculptured lines above the front and rear wheel openings. Up front, a new rendition of the Lincoln split-wing grille can come with adaptable LED headlights with blade-like projectors that aligned with the new horizontal grille bars.

Not only do the new LED headlights look sharp, they also provide better light. At speeds below 56 km/hour, LED reflector elements provide a wider and lower beam pattern. At higher speeds the light is re-focused to project further down the road.

The Lincoln MKX drive experience is primarily about comfort, quietness and abundant power, which the new optional 2.7 litre V6 EcoBoost engine certainly provides. It can deliver up to 330 hp, yet what’s most impressive about this engine is its silky, smooth V8-like performance with beefy torque output (up to 370 lb-ft), especially at low engine speeds. The carry-over base engine is a 3.7-litre, 300-hp V6.

Our test-drive tour through the Eastern Townships of Quebec confirmed that the MKX is a worthy wearer of the Lincoln badge. This picturesque area of La Belle Province is dotted with quaint little villages huddled around magnificent church buildings. Many of the roads, however, still bear the scars of those bitterly cold winters that Quebecers are accustomed to enduring.

The new integral link rear suspension, as well as the body structure and chassis upgrades, passed the rough-road challenge with aplomb. The MKX comes standard with Lincoln Drive Control, a suite of ride-enhancing technologies and it offers three driving modes (Normal, Sport and Comfort). The Lincoln “Intelligent” all-wheel drive system is also standard, as is a new adaptive electric power-assisted steering system that can change both steering feel and quickness, dependent on a number of operating factors.

While I prefer a shift lever of some type, the push-button transmission selector on the dash does give the MKX interior a sleek, uncluttered appearance. The selector connects to six-speed automatic transmission (both engines) and shifts can also be made via paddles on the steering wheel. City/highway fuel economy is rated at 14.7/10.3 L/100km (3.7L V6) and 14.1/9.7 L/100 km (2.7LV6).

Clever, under-console storage has also been created and super comfy 22-way adjustable front seats are a new option. These seats come with an active motion massage feature for the upper legs and lower back via six adjustable air bladders. They also come with four-way power head restraints and power thigh extenders.

If parking is not your favourite pastime Lincoln MKX has a couple of new technology solutions. An enhanced park assist system, offers 360-degree camera coverage to provide a birds-eye view of the vehicle (and up to almost two metres all around it), making any low-speed parking situation easier. An even more advanced “auto-pilot” parking system, with 12 ultrasonic sensors, can now guide MKX into a perpendicular parking stall, in addition to parallel parking assist and park out assist.

Like most vehicles in this class, numerous helpful driver safety aids are available for the MKX and include adaptive cruise control, lane-keeping system, blind spot information system and cross-traffic alert. A new pre-collision assist system helps avoid or lessen the severity of frontal impacts with another vehicle, or a pedestrian. 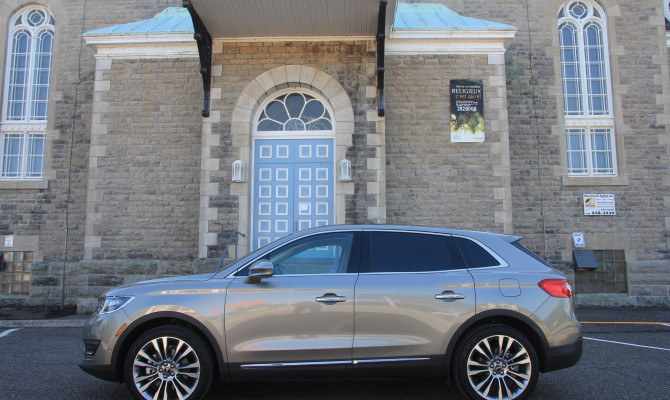