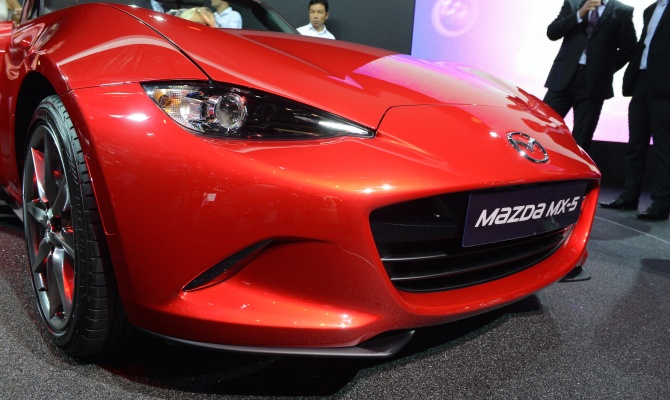 The 2015 model year vehicles are rolling into dealerships, with just a few stragglers set for later arrival in the New Year.

This week, the Driveway team takes a look at what’s new, in print and online here.

Over the last few years Mazda has been introducing vehicles with its new Skyactiv technology but there is one car that will signify the culmination of all the things Mazda does well, the next generation MX-5 (Miata). The MX-5 will come in 2015 as a 2016 model and all eyes are on Mazda to see what it can deliver. The bodywork is more dramatic and having seen it in person, the dimensions look fanatic but the new front grille might take a while to adapt too. The two-seat cockpit is roomier, thanks to a wider body and longer wheelbase but the overall length is 105mm shorter and 20mm lower.

The 2.0L Skyactiv direct injection 4-cylinder will power this lightweight car and power will go to the rear wheels though a 6-speed manual transmission. Engine output has not been announced, either has the price but expect the car to be competitive with the 2015 model on price.

The sixth generation Ford Explorer will arrive in 2015 as a 2016 model, now with new 2.3L EcoBoost engine available on the base and XLT trim. This replaces the older 2.0L Ecoboost and provides a 270hp, a 13 percent bump over the last version. The 290hp 3.5L V6 is carried over but the Sport trim and new Platinum trim will be fitted with the 365hp Ecoboost V6. Ford claims that styling is the number one purchase consideration so the shape was retained but new grille and LED headlamps help refresh the look.

This sixth generation Explorer marks the 25th anniversary of the iconic SUV, with over 350,000 sold in Canada so far. There is no question that the merger of Fiat and Chrysler has helped to introduce many new vehicles. The small car segment is a perfect example, the Fiat 500 and its variations has been a plus for Chrysler’s bottom line. Built in Europe on the Fiat 500L platform, this smaller Jeep Renegade replaces the Compass and Patriot models. Powered by either a 160hp 1.4L turbocharged 4-cylinder or a larger 184hp 2.4L 4-cylinder Jeep claims that this compact crossover is still a capable vehicle because of two available all-wheel-drive (AWD) systems. The standard models will be available with front-wheel-drive (FWD), with either a 6-speed manual or 9-speed automatic transmission.

Styling is all-American; the signature Jeep grille is married perfectly into the boxy design, as too are other Jeep styling cues. The interior is has a rugged, yet upscale design that features all of Jeeps latest technology, including the award winning Uconnect infotainment system. Pricing has not been announced but expect it shortly as it is due at dealerships very soon. Coming in 2015 is another SUV, smaller than the CR-V, helping to define the new subcompact SUV market. This little runabout is built off the excellent Honda Fit platform and will include many of the features that make that car a standout. The first is the interior of the HR-V, it will also feature Honda’s Magic Seats that flip and fold for amazing versatility. The same 1.8L 4-clinder engine with 138hp will power this vehicle, either with FWD or AWD, through a continuously variable transmission or 6-cpeed manual. Pricing will be introduced closer to the introduction this coming spring. Built in Mexico, the HR-V will give Honda the same leg up that the original CR-V did for the small SUV segment. It might surprise many people that the best selling electric car in Canada is the Chevrolet Volt, not the sexy Tesla Model S. There are many reasons for this, mainly the fact that the Volt provides all-electric transportation for 65 kms but with the aid of a small 4-cylinder generator to extend the range over 300 kms. This car has all of the upside of an electric car with none of the range limiting restrictions. In 2015 Chevrolet will introduce the second generation of Chevrolet Volt, one that hopes to improve on the usability of the car in terms of comfort and electric driving range. General Motors will showcase the next generation car in January at the Detroit Auto Show and the company’s CEO has stated that the new car “will store more energy in its battery pack with fewer cells, yet go further on a charge.”

General Motors claims that 80 percent of current Volt owners commute entirely on electric power, so any improvement to range will help increase this number.

The Volt isn’t a huge volume seller for General Motors but this new model will help the company to showcase what it can do technologically. General Motors has the capability to produce some the most advanced cars on the road.