An iconic American car, the Ford Mustang offers classic styling yet can also be a reliable and reasonably priced used sports car and a great driving experience… 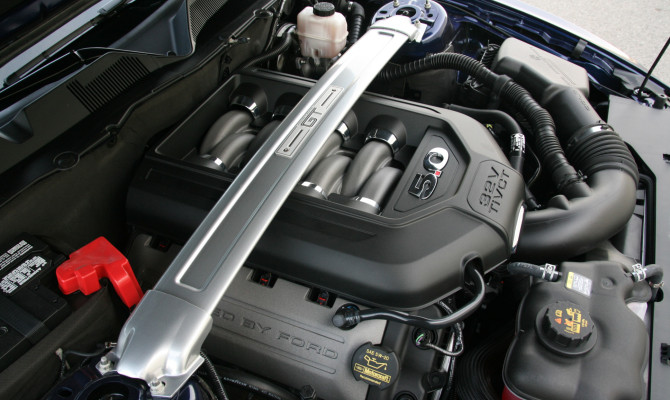 The 2011 model year edition of the Ford Mustang, coupe and convertible, came witha more menacing frontal appearance and, under hood, new engines produced more power with less fuel. So, you could also call it the “meaner and leaner” revamp.

Appearance changes on the 2011 included new headlights and revised lower fascias, fenders and grille, plus a power-dome hood that allows additional air cooling to the Mustang’s new engines. At the back, new three-light LED lamps sequentially signal a turn, reminiscent of the muscle car years.

Even the new base 3.7-litre V6 engine packs a punch as it can deliver 305 horsepower and can rev to 7000 rpm. Its rated city/highway fuel economy is an impressive 10.7/6.4 L/100km. And its power-to-weight ratio is almost double the previous base engine offering.

Moving up a trim the Mustang GT has a 5.0-litre V8 under its hood. This engine is also a four-valve, all-aluminum engine, only this one is can pump-out 412 horsepower. And sounds great doing it! City/highway fuel consumption is rated at 11.8/7.9 L/100km and a larger (cast aluminum) oil pan also extends oil change intervals.

The GT also comes with electric power-assist steering (EPAS), an upgraded braking system with vented discs all around and an enhanced suspension. GT buyers could also add a California Special appearance package and a Brembo brake and wheel package.

A six-speed manual transmission was standard and automatic option was also a six-speed. This automatic has a grade-assist or “hill mode” feature that prevents sixth gear selection on a steep up-hill drive, plus engine braking going down a hill.

There is another limited production edition of Mustang, the priciest and speediest pony of them all, the audacious Shelby GT500. Power comes from a supercharged 5.8-litre that can produce 650 horsepower and it can also deliver over 600 ft-lb of tire-smoking torque.

On the inside, a Mustang offers two-plus-two seating, which translates to limited leg and head room for the rear seat occupants. While Mustang’s trunk is not huge, it’s a little bigger and easier to access than the trunk in arch-rival Chevrolet Camaro.

Both the Coupe and the Convertible editions of Mustang claim very good crash test safety ratings. Consumers Reports gives it “recommended buy” status and reliability has been average to better-than-average, with the V6 engine versions being slightly more dependable.

The 2012 model year brought the re-introduction of a Boss 302 coupe edition, with a high-output 5.0-litre V8, plus a new Premium trim level of the V6 edition. Selectable electric power-assisted steering, with Comfort, Sport and Normal settings, also became standard on all models.

The 2013 Mustang got lighting that is even more distinctive and some minor exterior tweaking. A new SelectShift Automatic transmission with a manual shift feature was a significant mechanical upgrade and the 6-speed manual gearbox also gained a Hill Start Assist feature.

An iconic American car, the Ford Mustang offers classic styling yet can also be a reliable and reasonably priced used sports car and a great driving experience.