The Los Angeles Auto Show is full of eye-popping sights… some even include cars!

It’s not difficult to have your head turned but it is a challenge to pick one’s top picks. Well, I’m up for the challenge.

The mid-size pickup truck market has been all but abandoned by the domestic automakers over the last few years, leaving this category entirely to Toyota and Nissan with the Tacoma and Frontier trucks.

Wait until next year and the choice will include the all-new Colorado from Chevrolet. Building off the success of the all-new full-size Silverado, the engineers have taken the same approach to this new truck. Their chief engineer told me that the interior will be just as quiet and refined as the bigger brother. He went on to tell me mid size truck owners are looking more for maneuverability and fuel economy.

On the economy front, there will be three engines to choose from. Out of gate, there is the base 2.5L 4-cylinder engine or a 3.6L V6. In the second model year the Colorado will be equipped with a 2.8L diesel 4-cylinder, being the first truck to have a diesel in this class.

Interestingly, the same Italian company that makes the new V6 diesel for the Ram 1500 supplies it to GM. Fans of the Subaru WRX will be very excited about the arrival of an all-new car, but maybe a bit disappointed that this production model doesn’t look very much little the sleek and sexy concept that was unveiled earlier this year.

Not a real head-turner but it should prove to be a capable car thanks to an all-new direct injection 2.0L 4-cylinder putting out 268hp and matched to the first 6-speed in the WRX. This new model also gets a new torque vectoring system to enhance the symmetrical AWD system Subaru is known for, plus the stiffer chassis, bigger brakes and performance-tuned suspension will be welcome by WRX fans.

The interior is bigger, especially the back seat due to 25mm being added to the wheelbase. The cabin finally gets a refresh with better-looking materials and an optional Harman/Kardon audio system. 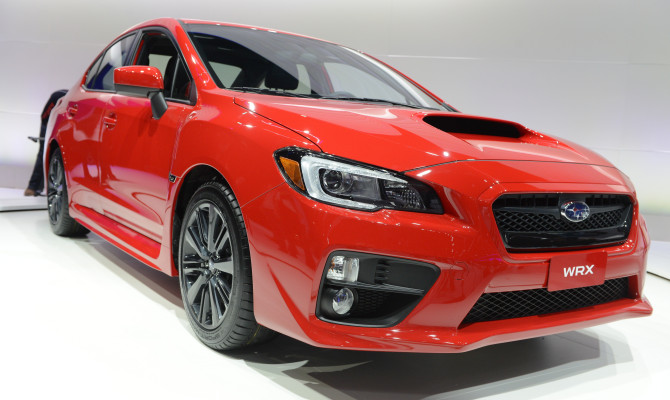 One of the surprises at this years show was the introduction of the Legacy concept.

A head-turning design that my sources tell me looks a lot like the production car. The problem is we saw the WRX concept earlier this year and the just unveiled production version is not even close to the concept. Lest hope that the next Legacy does indeed look as good as this.

The metallic, almost chrome looking paint, certainly helps to make the car pop but the bold front grille and macho stance could very well be included in the final version. Obviously, tricks like hidden door handles and ultra slim side mirrors will need to be amended but lets hope that Subaru can come close to this concept.

It certainly was a surprise at the show. Lincoln has a long and distinguished history as an American premium brand but over the last few decades, it has been an extension of existing Ford products using different badging and trim. There is now a long-term plan to resurrect the Lincoln brand with all-new vehicle that use some Ford components but are developed separately from the main Ford line of products.

The first vehicle to get this was the MKZ sedan that arrived earlier this year and next is a compact crossover called MKC. Even though it shares a platform with the Ford Escape, it has been designed and engineered to be a totally different car. The wheels sit wider and the roof is lower for a purposeful stance. The design, other than the trademark Lincoln grille is very European and the back wrap-around hatch is maybe Audi inspired.

Under the hood is a 2.0L turbo 4-cylinder with 240hp or an optional 2.3L version with 275p and 300 lb-ft of torque. Standard in Canada will be all-wheel-drive and adaptive suspension, matched to a 6-speed automatic transmission. The interior is covered with soft touch materials and a more expressive dash, rich in soft touch materials and advance communications and connectivity.

The MKC will go on sale next year and will start at $39,940. Lincoln hopes to get attention with this stylish and well-equipped vehicle at an attractive price. BMW has made a change in the naming of their vehicles, meaning the 3 Series is now the sedan only in the BMW lineup. The coupe and convertible version are now called 4 Series. The 4 Series coupe is already available at your local BMW dealership but the convertible was just introduced in Los Angeles.

The all-new cabriolet is wider and features a new three-piece retractable hardtop and for the first time X-Drive AWD is now available on the convertible models. Interior refinements include a new neck warmer to that blows a steady stream of warm air on the front passengers neck and shoulders, helping to elongate the convertible season. Engines will be the same as the 4 Series coupe with e 2.0L 4-cylinder base engine and larger turbo 6-cylinder.

Porsche is hoping to bring their brand to a larger number of potential buyers who might have not been able to afford a Porsche in the past.

Los Angeles was the stage for the world introduction of the small SUV called Macan. Based on the same platform as the Audi Q5, this lower, sleeker and much more aggressive Macan will attract a lot of attention based purely on looks.

Porsche made it very clear that this is not just a Porsche in name but also in performance. Having a chance to sit in it I can tell you that it is very low to the ground and all passengers fit snugly in the sporty interior. The dash is a smaller version of the stunning Cayenne interior but it is what is under the hood that matters.

The Macan S is fitted with a 3.0L turbo V6 with 340hp, then there is the Macan Turbo with a turbo 3.6L V6 and 400hp or a 3.0L V6 turbo diesel. The power is shifted through a duel clutch transmission that is sure to delight.

Look for the Macan coming next year. This year we have seen Jaguar make a big splash with the introduction of the all-new Jaguar F-Type convertible. It was one of the most anticipated arrivals of 2013.

Next year, we get to look forward to the coupe version of the F-Type, a dynamite looking coupe with a stunning silhouette and improved dynamics thanks to a stiffer body. There will still be two versions of the 3.0L-supercharged V6 with 340hp in the base coupe or 380hp in the F-Type S. The top of range model is the supercharged 5.0L V8 with 550hp called the F-Type R. This model can make a run to 60mp/h in 4 seconds and is fitted with the second-generation electronic differential and torque vectoring.

The body of the car is built with extensive use of aluminum to produce the stiffest Jaguar ever made.

This is one heart-pounding coupe I cannot wait to try.