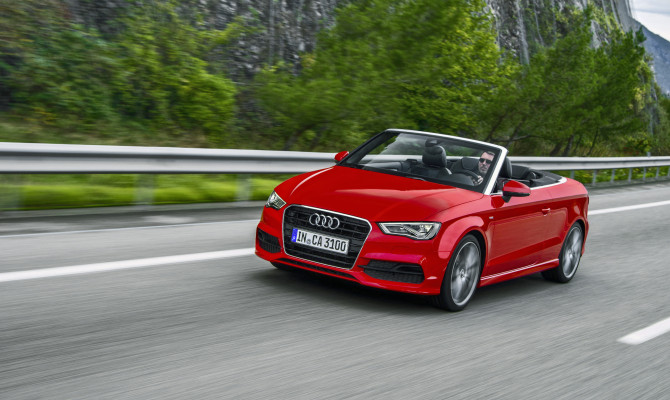 MONACO: Over the next 12 months or so, consumers are going to be treated to an onslaught of new entries into the premium market. Not to worry, the next wave of German sedans and convertibles are of a more affordable nature.

Recently Mercedes Benz introduced their all-new CLA 250 at an eye-popping price of just $34,000 for a sleek and sexy sedan. Next year we will see the introduction of BMW’s new 1-series and 2 Series sedans, coupes and convertibles.

This week I had a chance to drive both the convertible and S3 in Monte Carlo, a full year ahead of their introduction here in Monaco. I suspect the real reason to have a media event so far in advance is to give the buying public some insight and possibly delay buying a competitor’s car.

Audi is one of the fastest growing premium brands and a big part of that is the variety of cars they offer. Unfortunately, we will no longer get the sportback but the fact we get the rest of the line of A3s is exciting for buyers.

The A3 is built off a shared platform with VW called MQB. This platform was a significant investment for the VW group as it is lighter, bigger and stronger than the last Golf platform and provides a sturdy basis for the A3 Cabrio and S3.

The new Cabriolet is 60kg lighter than the outgoing European model yet the wheelbase is longer and the interior room and trunk more ample.

It could be argued that Audi is building some of the most attractive cars these days and these smaller products still convey the same sense of power and solidity that the bigger products portray.

The S3 is especially forceful with a 15mm lower stance than the A3 sedan. The air intakes are bigger with more detail; the side mirrors are highlighted with brushed aluminum and the rear of the car looks more masculine thanks to chunky exhaust tips.

The Cabriolet on the other has is a more sophisticated approach thanks to the use of aluminum around the front windshield and trim along the doors and rear quarter panel that make the car look bigger than it is.

Audi claims that this new five-layer convertible roof is one of the quietest on the market because of a special layer of sound insulation. The interior headliner is colour-matched to the car for an added level of visual pop, plus the roof can be raised or lower while the car is driving up to 50km/h.

Another strength of Audi is interior fit and finish and these new products are covered in first class materials.

The dash has a centre-mounted screen for accessing the easy to use computer controller. Unlike the Mercedes CLA, this screen can fold into the dash to provide a more polished look. Some think the dash mounted screens look like and afterthought but this one gets around this problem.

Space is good for such a compact car. The back seat of the S3 sedan is actually big enough to fit adults up to six feet tall and the side windows are much bigger than the new Mercedes CLA, providing a more practical day-to-day sedan. The trunk is large and the rear seats split and fold for added cargo volume. This is true with the Cabriolet but the space is constricted when the roof is down.

The S3 comes with nicely bolstered front seats in contrasting colours, plus an optional diamond pattern stitch can be ordered to take the sporty sedan to another level. I found the seating position very comfortable and outward visibility is not a problem. The Cabriolet seats are fitted with a heater that showers the front passengers with warm air across their shoulders and neck for top down stints.

The weather in Monte Carlo was perfect for the convertible; the sun was shining off the Mediterranean, showcasing this convertible of opulence at a more affordable price.

The Canadian models have not fully been nailed down, as there is still a year to go until the Cabrio and S3 arrive.

What is established is the convertible will come with the all-new 2.0L direct injection turbo with 220hp, matched to Audi’s Quattro all wheel drive system. A six speed automatic is confirmed but the duel-clutch S-Tronic transmission might be sold as an option in this model. There will be no manual shift and no diesel, which is a shame as I drove one of the European versions with this setup and it was superb. The S3 comes standard with a 300hp version of the same 2.0L engine and the duel clutch automatic and of course AWD. Not as powerful as the 355hp Mercedes CLA 45 AMG but I feel it has more usable power.

The CLA gets peak horsepower at very high revs, where this new S3 pulls from very low speeds up to higher speeds. I experienced this carving the switchback mountain roads just above Monaco. Power is not an issue; I would argue that the S3 is a better every day car compared to the more nervous feeling AMG competitor. The suspension is more compliant and the power is a perfect combination of drivability and enthusiasm.

At the end of our day I sat next to Florian Uselt, Audi’s head of small engine development and I asked why they did not decide to chase the horsepower rating of 355hp from the Mercedes CLA AMG. His answer makes sense and was confirmed in the way the S3 behaves: He feels that everyday drivability and performance need to be balanced and they look at the car as a whole, meaning the environmental impact and fuel consumption as other target, not just power.

It’s going to be an exciting time to be in the market for an entry-level premium car over the next year. The A3 Cabriolet and S3 confirm that good things do come in small packages. Pricing has not been established for the Cabrio but it was hinted that this model would be roughly the same price as the S3, which has been confirmed at $44,000, roughly $6000 cheaper than the CLA AMG.

The base A3 sedan will arrive is a few short months with a 1.8L turbo gasoline engine, an optional TDI diesel and the same 2.0L turbo found in the Cabrio. The S3 really is the sweet spot for drivers that want to have extra power but with a very compliant and comfortable ride.

The combination of usable trunk space and back seat, simple yet elegant dash, power the driver can use at a lower price than the completion is something potential buyer might want to wait a year to try for first hand.