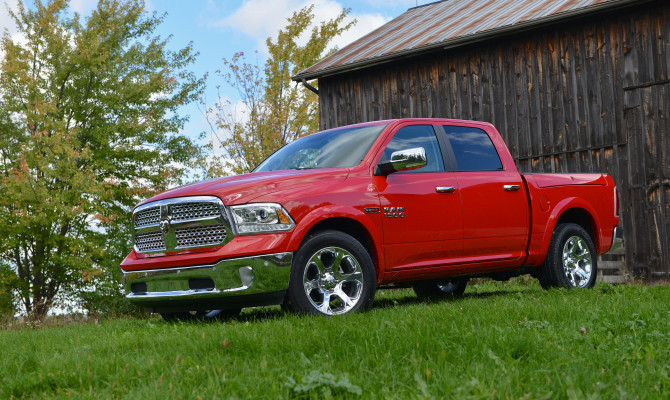 The full-size truck market is big business for automakers and a big deal for the business and people who depend on them.

For almost five decades the Ford F-150 has been the best selling truck, with little chance they will lose that crown in the near future. What has been happening, over the last few years, is a strong shift from General Motors to RAM in terms of establishing the second best selling truck brand. The rise in RAM popularity can be traced back to a few key changes over the last several years, from muscular styling to class-leading interiors, a refined ride, plus engine and transmission advancements.

While GM was selling the same trucks year after year, RAM moved forward and has been rewarded handsomely. GM too has recently released all-new Chevrolet Silverado and GMC Sierra trucks but the initial sales response has been rather lacklustre.

I drove the 2014 RAM model range recently, on a beautiful fall day, just outside of Toronto. The “RAM Roundup” was a great opportunity to get my hands on these new trucks well before they arrive at BC dealerships.

A big part of the RAM brand success has been built on the sturdy and macho exterior styling. Front and centre is a grille that was enlarged, but better integrated, for the 2013 model year. Depending on the trim the grille finish can be chrome, painted or with a different insert. This feature is one RAM owners love so, in this case, larger is better. Behind the grille are “active shutters” that close at higher speeds to help send the wind around the vehicle to improve aerodynamic efficiency. The same idea was also behind the longer side step, which helps reduce buffeting down the side of the trucks.

While RAM does not have the clever tailgate stepladder that Ford introduced several years ago, they did update the bed of this truck slightly. The sides of the bed can be equipped with an integrated RAMBox storage system. For 2013 this feature was integrated, along with the tailgate to lock and unlock with the vehicles key fob. This is especially handy for tradespeople that need to lock tools in their bed.

One option that I find fascinating, and would seriously consider, is the $1,500 air suspension that can be lowered for easier entry into the RAM or loading into the bed. Plus this system automatically lowers over 100km/h to also reduce aerodynamic drag. At lower speeds and for off-road duties, the air suspension can be raised for better ground clearance.  Having had a chance to drive several RAM trucks with this feature I notice the already smooth ride is even better and the cabin is further insulated from vibration.

The RAM heavy duty can also be equipped with an air suspension but this is limited to the rear. This helps level the load in the bed for better handling and towing.

In the past, trucks were typically used for work. Today, trucks have grown in popularity because they can be rugged on a work site and luxurious for all occupants. Having driven the Ford and new GM trucks recently, I can easily say that RAM still has the lead in interior design and finish with the Chevrolet and GMC right behind. (Ford is looking dated but look for an all-new F-150 in 2015.) The centre console can be equipped with an 8.3-inch Uconnect communications and entertainment screen. In addition, there is a large 7-inch screen behind the steering wheel for fully customizable instant information readouts. The dash and seats can be trimmed in leather typically found in luxury cars not long ago.

What many RAM buyers might find different is the rotary dial on the dash that changes the 8-speed automatic transmission, while 6-speed automatics still get the centre console shifter. This is something that started recently in high-end cars like Jaguar and Range Rover but is now found in RAM. It takes about a day to adjust to the new shift position but, after a while, the driver forgets.

The biggest change for 2014 includes the first diesel engine found in a light duty 1500 pickup truck. This is an Italian designed engine that has been used extensively in Europe in Jeep products like the Grand Cherokee. With 420 lb.-ft. or torque, this new “EcoDiesel” has the same output as Ford’s Ecoboost but not the same towing capacity. Rated at 9200 lbs. this truck will be perfect for buyers who want impressive fuel economy and good towing capacity; a balance of usability and thriftiness. This engine has not been rated yet for fuel economy but thanks to a standard 8-speed automatic transmission, this new EcoDiesel is going to get better numbers than the already class-leading gasoline V6 RAM. Look for the new EcoDiesel RAMs arriving in January of 2014. On the heavy duty side there is also an all-new engine in the form of a 6.4L Hemi V8. The old 5.7L was not a perfect match for gasoline truck buyers but RAM hopes this 429 lb.-ft. engine will attract more buyers.

As competitive as the car business is, the truck side is nuclear. Truck buyers take their trucks very seriously and the people building them do, too. It takes dynamite to get a loyal truck owner to change brands but RAM has done a good job of blasting the competition. Most of this success has been thanks to constant improvements instead of waiting years to update their rigs. With a new diesel engine in the 1500 to an all-new gasoline engine in the heavy-duty trucks, matched to sophisticated transmissions, improved suspensions and cabins, it is no wonder why that RAM is on an upward swing.