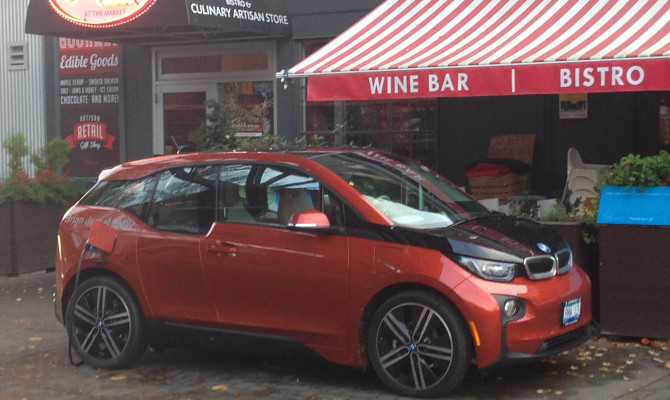 Is the BMW i3 Destined For Your Driveway? A BMWi3 hooked up to a street-side fast charger in Amsterdam. An hour there will get you home with ease. (Photo: BMW) The test cars at the international launch of the BMWi3 in Amsterdam, slept in a public parking garage equipped with a long wall of chargers. (Photo: BMW) The BMWi3’screcharging cable folds into a small forward trunk under the hood. (Photo: BMW) The BMWi3 electric ‘gas’ cap! – And when the cable is ‘refuelling’ overnight nobody is disconnecting that baby without a key. (Photo: BMW) The BMWi3’s central display offers crisp views of maps and other information. The mode featured here shows pictorially how far the car can be driven along a chosen route in either the Comfort or Eco Pro driving modes. (Photo: BMW) This display mode in the BMWi3 shows where the nearest recharge stations can be found along the chosen route. There are close on a thousand public recharge stations in the Amsterdam metro area. BC has a long way to go! (Photo: BMW) Rear-hinged doors on the BMWi3 provide fabulous ease of access to the front and rear seats. Note the ‘step’: it forms an important part of the shell’s strength. (Photo: BMW) The click-switch gear changer in the BMWi3 seen here through the steering wheel is easy to operate but it is so unlike any other gearshift it does take a good few klicks at the wheel to get used to its operation! (Photo: BMW) The BMWi3 dash is simply elegant. Lovely wood finish on the passenger side on the test car and the material used around the dash has that flecked raw carbon fibre look, which is what forms the car’s external shell. The central hi-def display screen is as crisp as your home big screen TV. (Photo: BMW) Now the front end of the BMWi3 does look like a Bimmer! – That said; take a closer look at those ‘kidney grilles”. They are false because the electric car needs no rush of air to cool what’s under the hood. (Photo: BMW) The BMWi3 wheel design is traditional but the tires are slimmer than typical BMW products. (Photo: BMW) The look of the all-new 2014 BMWi3 electric car is based on functionality rather than on beauty. It’s designed to tote up to five folks and their everyday baggage primarily in city areas, though its driving range of 160 kilometres-plus on a full charge makes it a serviceable car for the near- Boonies! (Photo: BMW) The deeper rear side windows on the BMWi3 are quirky in the appearance in that they break the line from the windshield to the rear. However, it does provide a view for passengers that would be denied if they did follow that line. (Photo: BMW) Of course, if you don’t fancy bussing or walking home you can always take the bike you locked up earlier in the day or take a rickshaw ride in Old Amsterdam. (Photo: Keith Morgan, Driveway) The intermodal display will also show on your smart phone steering you home on foot or transit. And you can keep checking all night to see how your baby is charging! (Photo: Keith Morgan, Driveway) The BMWi3 is hooked up to the juice but home is more than a few blocks away. When the central display is intermodal mode it displays your way home via transit or on foot! (Photo: Keith Morgan, Driveway)

AMSTERDAM – BMW has joined the race for the electric car dollar. On the evidence of two days driving the END_OF_DOCUMENT_TOKEN_TO_BE_REPLACED